Controlling credit card debts can be really annoying, specially when you have to manage more than one through different mobile apps. In UK, people make daily use of different types of credit cards and their biggest struggle is to manage their limits and interest charges every month.

Credit card manager to improve user’s control of their finances. Tailor-made insights to help users manage credit card's debts by advising them of credit limit, interests, and alerts when exceeding their spending average. 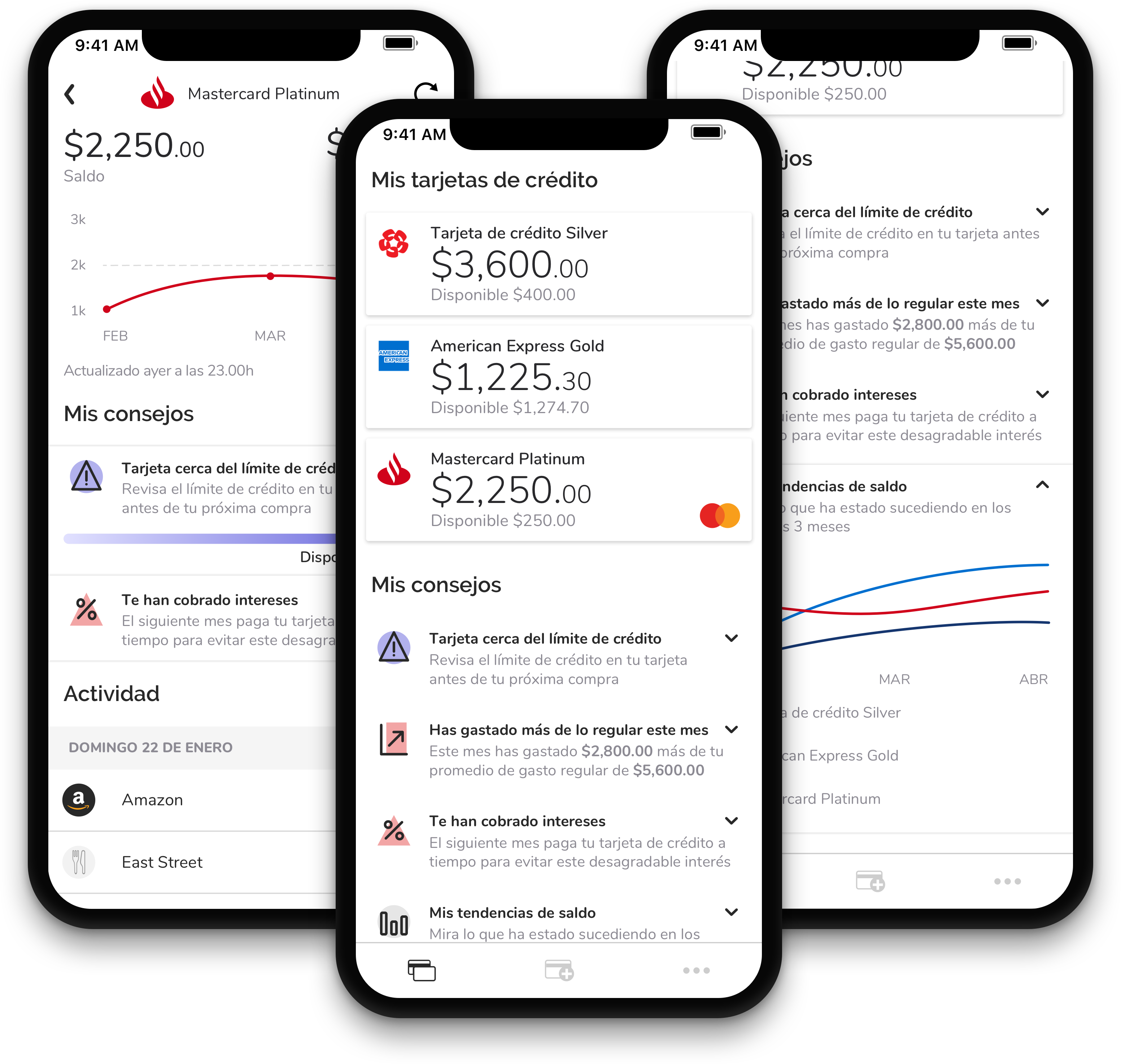 The main goal of the Santander Innovation Lab is to create amazing products that help users improve their financial lives. Following a methodology similar to Lean, the project starts with a list of hypothesis defined by the Product Owner and a few round of interviews to test these. Once the concept is defined, the next step is verifying if it possible to build a solution in the next three months with the resources we have. If the result of these is positive, we can start with definition and ideation processes, followed by developing prototypes to test and iterate when needed, until we have a final MVP to test with a bigger amount of users. In this project I worked with a Product Owner from Santander, by conducting user research we found out a lot of pain points that users deal with every day in regards to credit card managing. In order to compile all the information collected from interviews we create a User Persona, combining different pain points and insights discovered on research. 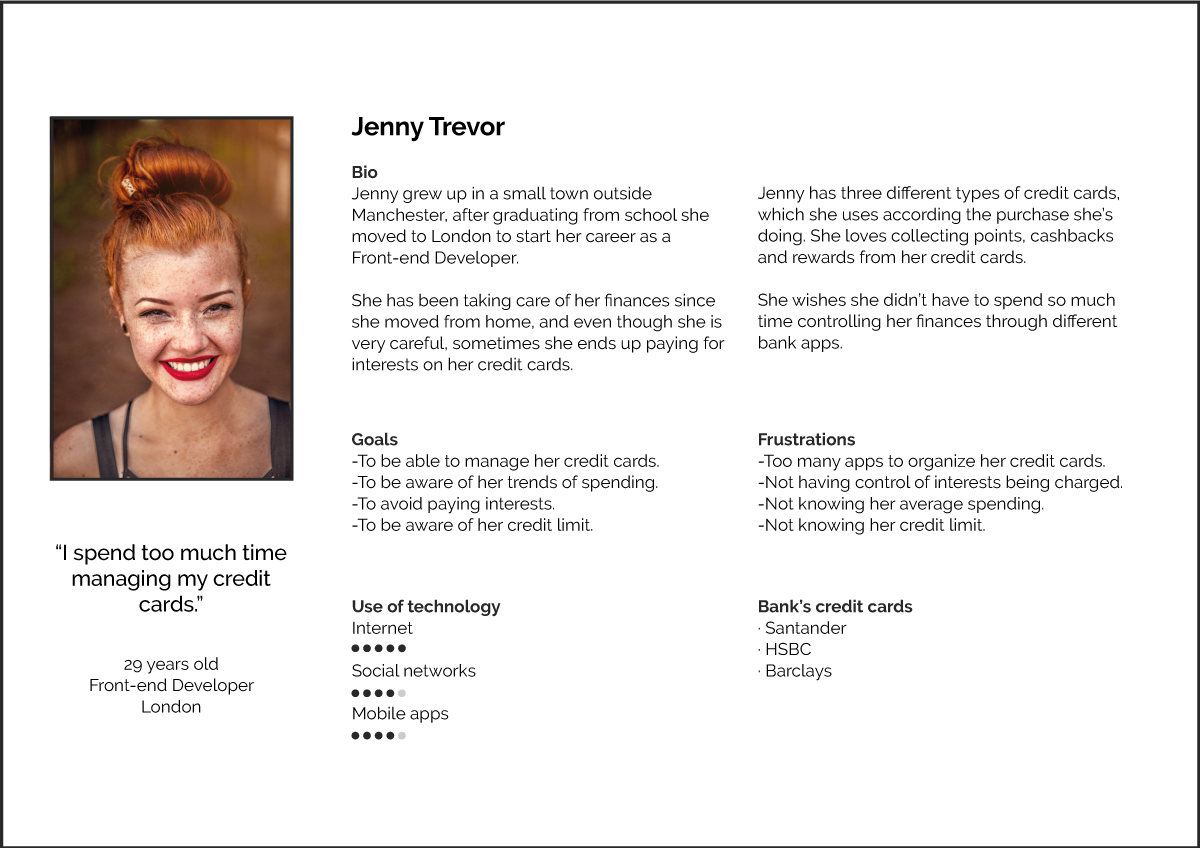 User persona based on the research made, and all the information collected from questionnaires and interviews.

· Difficulty to manage credit cards by using different bank apps.
· Lack of information about how much interest is being charged.
· Lack of awareness if the credit is close to limit.
· Need of a tool to control trends of spending.

Flow of the main features on the mobile app.

Based on the insights collected on research the ideation process begins. Starting with brainstorming sessions including other team members like Project Manager and Tech Lead, we continue by organizing the hierarchy of importance and possibilities of our ideas on 2x2 canvas. Once we defined the functionalities that this product is going to take, we start creating the sitemap and task flow of the product, meanwhile the development team defines the resources and technologies we are going to need and apply, like frameworks and API’s. With the features and flows defined I started creating mid-fi wireframes, and high-fi wireframes after first were approved. As the methodology we were following required us to deliver the first handoff to the development team in four weeks, we conducted some iterations on the screens based on user testing.

Main screens in hi-fi for the final prototype of the mobile app.

In this case, the P.O. was in charge of defining profiles of the users recruited, and writing guidelines for the interviews where we wanted to confirm some hypothesis, validate features and test an interactive prototype. We had 4 rounds of interviews at least once a week in London, the P.O. made questions to the users related to credit cards, and how did they manage them, and I took notes of all relevant information being said by the users. The last part of the interview was focused on the the user testing the prototype, while giving feedback out loud on everything they saw, thought, felt, liked and disliked. After asking the user to run some tasks on the prototype, the P.O. would ask some specific questions related to the product, for example if they knew any similar product or service, if it was usable and what kind of user they imagine using this product. 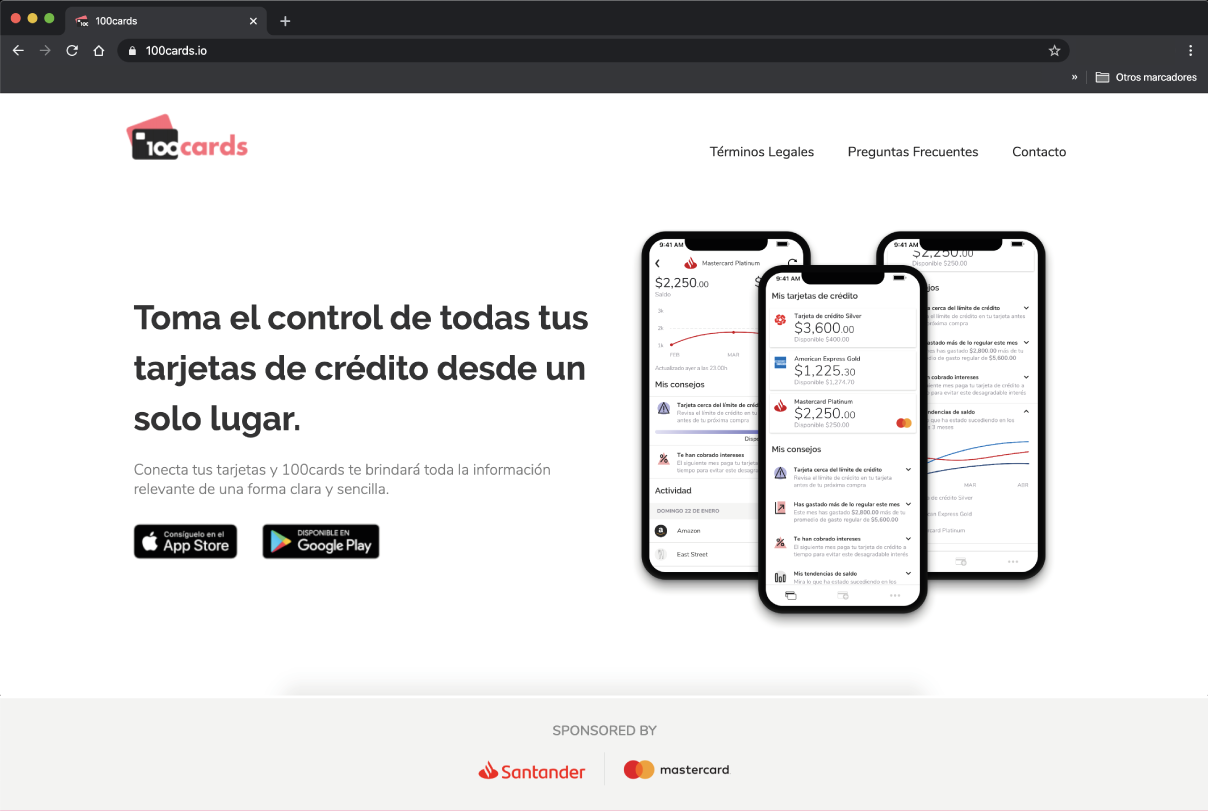 Landing page to promote the app.

It was really interesting to work in a real project involving a development team, in this kind of lean agile methodology. Working with this type of methodology makes research and testing essential to get to a good final product. Interviews gave us all the insights we needed to improve the prototype and finally lunch it to the market. Future iterations will come after the feedback from real users, and new rounds of interviews this time testing the real app instead of a prototype.